The Belsize Community Flood Project aims to help integrate the community within St Denys, Southampton that has been affected by flooding during recent years. A Flood Action Group was established from several voluntary members of the community.

The engagement on residents to alleviated flood risk was conducted through the promotion of Property Level Protection (PLP) measures. In addition to this, the construction of flood walls and gates surrounding the affected properties was also reviewed and community resilience measures were also assessed for viability and incorporation on affected properties.

The development of a community resilience plan included the creation of a greater sense of community and the provision of a point of contact to educate the wider community on flood risk. More information on the community flood resilience plan can be found via the Belsize Flood Action Plan.

Based on the response during the February 2014 flooding event, this flood plan seems to have been very effective as neighbours felt they received more support than during the previous flood events. In addition to this, community cohesion significantly increased following the creation of the Flood Action Group and the flood resilience plan. Several members of the Flood Action Group have also become formally affiliated with the National Flood Forum.

Do you know what to do in the event of flood near your property? Find out to how to protect your home before and after a flood by @floodguidance

Please select a link below to find out about a specific element of flood guidance. This will allow you to understand how to protect you home or busine...

Very good to see Mary. Congratulations. You are indefatigable and an inspiration.

#WorldEnvironmentDay
#SuDS create a more #natural #water cycle and have lots of additional benefits too !! 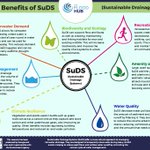